What Can Gogglebox Teach Marketers?

Gogglebox is a British observational documentary, which started airing in March 2013 on Channel 4. The basic premise of the show involves us, the viewer, being a fly/camera on the wall in the homes of the public as they watch and comment on an evenings television. Sounds droll but it has captured the attention of today’s audience.
Its viewing figures for the first ever episode were 1.18 million not making it to Channel 4’s top 30 shows of that week. Since then they have risen steadily to 3.37 million (for episode 7, series 3) making it Channel 4’s most viewed show that week (figures from Wikipedia).

Executive Producer and creator, Tania Alexander, claims the idea was to create a mix between Harry Hill and The Royle Family. Google’s search results for “gogglebox” brings up The Royale Family under the ‘People also search for’. This will most likely be because the show has been narrated by Craig Cash and currently by Caroline Aherne who co-wrote and starred in The Royale Family together.

Love it or hate it Googlebox has seen phenomenal success over the last 3 series. This success helped them move to the prime-time 9pm slot on Channel 4’s Friday night TV schedule. If you haven’t experienced Gogglebox for yourself, I recommend you give it a go before reading on 4OD before reading the rest of this post. Anyway I have watched it as a viewer and as a marketer and think there are several takeaways we could learn from the show:

The current series is made up of 16 separate viewing groups presumably chosen to represent a broad range of classes, ethnicities and dynamics. Below shows the current series 3 cast, their location and age (for some). When we are thinking about marketing our product or services we should think about the huge variety of people in our population or audience. Understanding these people and connecting directly with them can make all the difference for our ROI. 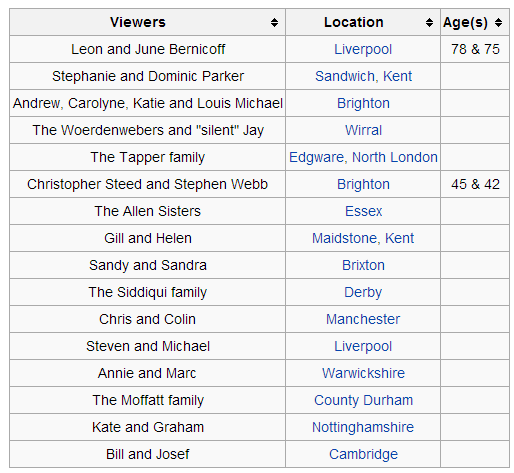 From a marketers point of view I see the show as a window into Britain’s current culture and societies. I also see reams of buyer behaviour data in every show. When creating persona’s for our brands or audience, us marketers can learn a lot by looking at the habits of those on the show. For example: 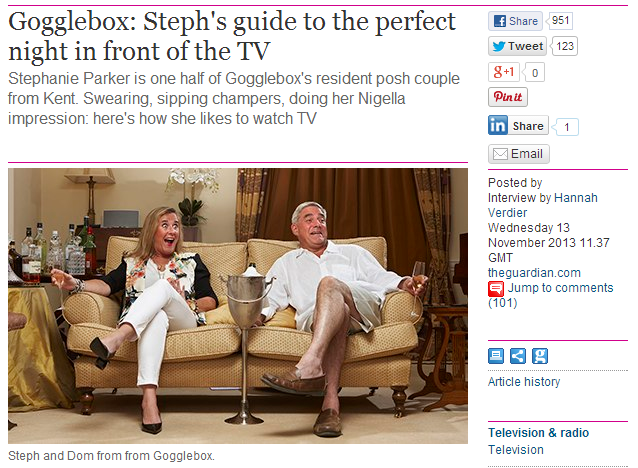 The cast of Gogglebox is a great example of a brand creating influencers that shout about and actively promote a product. Obviously in this case the ‘brand’ is Channel 4 and the ‘product’ is the show itself. The cast are featured in countless interviews on popular publications and radio as well as social media. They are currently encouraging viewers to vote for them to win a BAFTA award. Here is a very recent example:

There’s just enough time to put the kettle on & vote for #TeamGogglebox to win the #BAFTA http://t.co/zB7oRUp6rS pic.twitter.com/K2TPpdEDi8

The show has successfully brought the stars into the real world by giving each of the cast members their own Twitter profile. This lets them interact with their fans, who no doubt feel as though they know them. Even Leon and June, the eldest couple on the show, are now regular users of Twitter, amassing over 81,500 followers to date.

The show’s #gogglebox hashtag has had 76,975 mentions in the last 30 days alone (according to Topsy).  Unsurprisingly the #gogglebox mentions peak every Friday in-line with the show airing. Celebrities such as Tim Lovejoy and Clare Balding increase the reach by tweeting about the show and including the hashtag. A great example of utilising influencers to increase exposure.

The show is a veritable gold mine of opinion data for any TV producer trying to understand the likes and dislikes of the target audience. This would be particularly useful if carrying out research into a new show. During one episode a documentary about UKIP’s Nigel Farage was featured and provided a very interesting mix of feedback and reaction to him and his parties views. If I was his opposition I would have been watching and frantically making notes.

By creating something based around real people Channel 4 have struck TV gold. I think this is largely down to the way us, the viewers, can relate to the various cast members lives and opinions. Marketers can learn a lot from this when thinking about their content, advertising and targeting. Build relatability into these elements and you are sure to increase your reach and sales.

I may have missed some out but I am (genuinely) about to go off and watch Gogglebox so this will have to do for now. I welcome any thoughts or additonal learnings you can think of in the comments section below.

What Can Gogglebox Teach Marketers? was last modified: May 22nd, 2015 by Col Skinner

» Marketing » What Can Gogglebox Teach Marketers?
On May 2, 2014
By Col Skinner