LinkedIn is a business media platform that’s been around for a while. However, many of you probably aren’t aware of how effective it can be an as B2B advertising tool. It is a platform I have been on since my early 20’s and something I thought was for fuddy-duddy businessmen until I turned 30 and realised its value. Because the audience is generally focused on business, recruitment, learning and sales, it’s not a platform that’s often picked out for the kind of show-stopping ad campaigns you see on Facebook, Twitter and Instagram.
But, just because it’s not so well-known for the wow factor on a broader scale, from a B2B perspective, the right ads targeting the right users can result in some impressive results in terms of CPC and ROI.

Let’s take a look at six LinkedIn ad campaigns that highlight just what the right ad campaign on this platform can do for a business:

Asset Management firm ETF Securities was searching for the right way to connect with the right followers to share its research and insights with, in a highly competitive industry. After considering different options, the company turned to LinkedIn with specifically targeted sponsored content ads across the platform.
Using impactful infographics and video, the content ads shared the company’s wealth of investment research and insight to attract the attention of individuals and other firms interested in what ETF Securities had to say. The campaign resulted in a 95% year-on-year increase in LinkedIn followers.

In an effort to promote its Worldwide Business Class offerings to a more professional audience, Royal Dutch KLM turned to LinkedIn video ads. However, taking a leaf from successful campaigns elsewhere, the airline injected a little fun to make it memorable.
They used their own airline staff as the stars of the ads to model a limited-edition KLM Christmas jumper. It was a seasonal but still understated approach and the videos certainly seemed to impress the audience, achieving a 33.85% view rate, for a $0.06 cost per view, well below the average price. 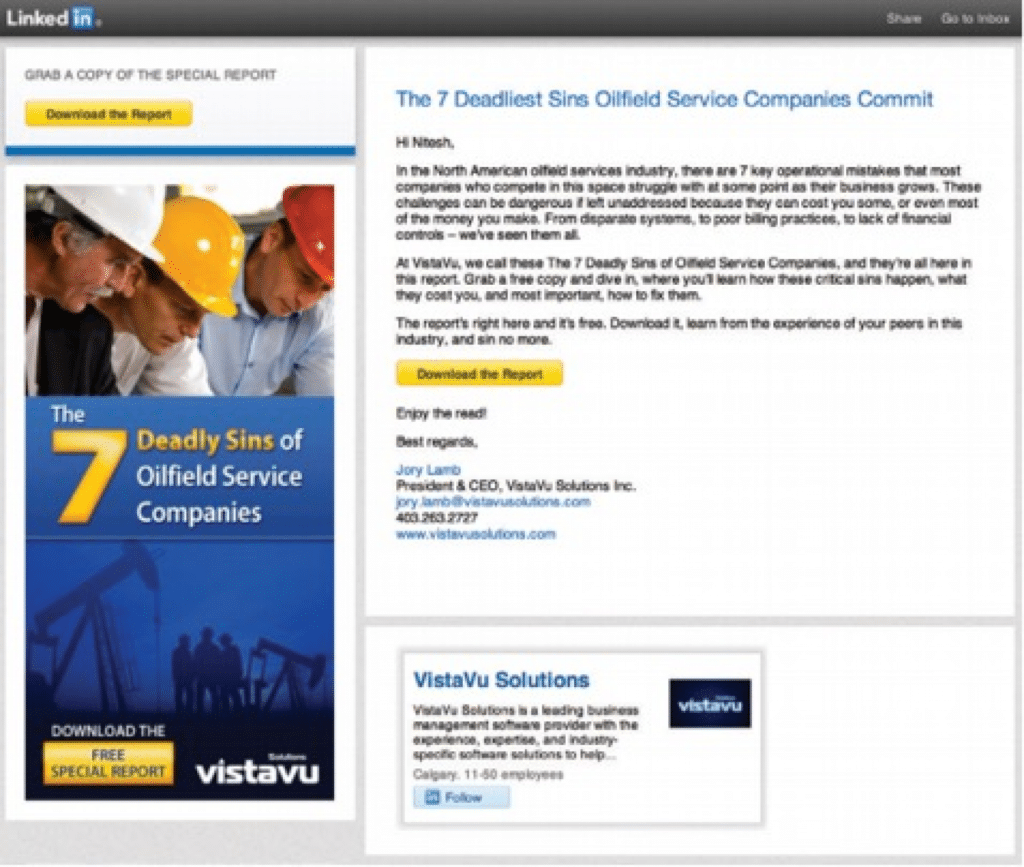 Oil field services business management firm VistaVu has a specific audience. To find more customers within that niche, it created a very targeted ad campaign for that market. Display ads were used effectively with a clear message for the identified target market, highlighting exactly what VistaVu could do for its potential customers.
Those ads were combined with targeted InMails and 19 of 20 leads gained in the first week of the new LinkedIn ad campaign were converted into qualified leads. VistaVu said it gained 4-5X more leads from its LinkedIn Display Ads than other display marketing it had undertaken and a 2.4X higher lead conversion rate. All that for 75% lower cost per lead. 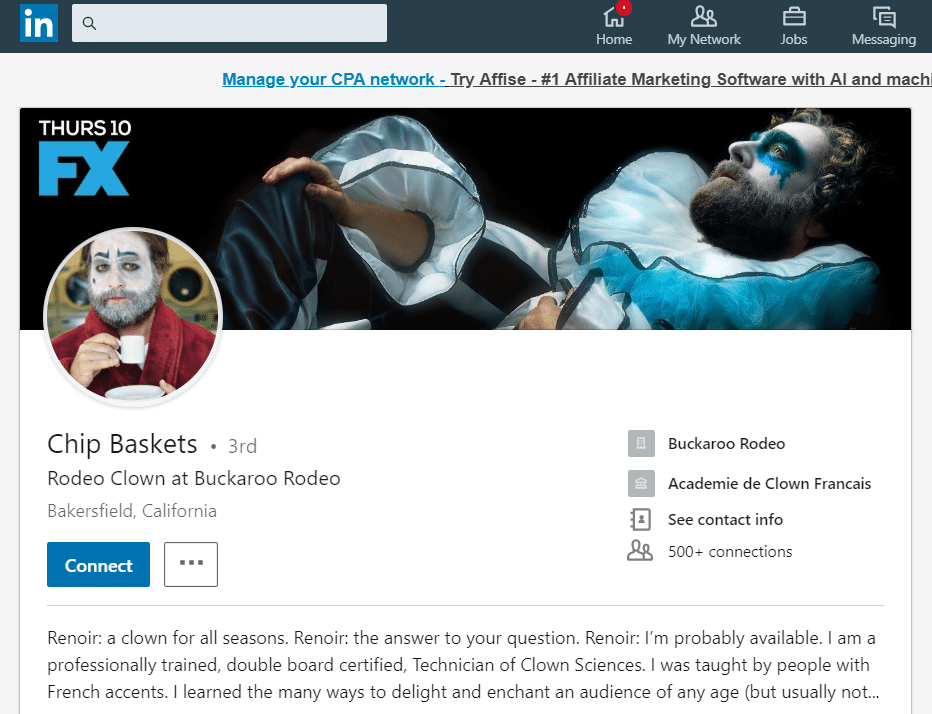 FX show Baskets is a dark comedy following the central character, Chip Baskets and his search for a job as a professional clown. So far, so what. The show’s producers decided to bring a touch of reality to the protagonist’s job search and created a full LinkedIn profile for Chip.
While this isn’t the typical ad campaign for LinkedIn, Chip Baskets’ profile has over 500 connections and almost 1,300 followers. That goes to show that LinkedIn can be used in an innovative way to help promote your business, your search for work, or to promote a TV show! 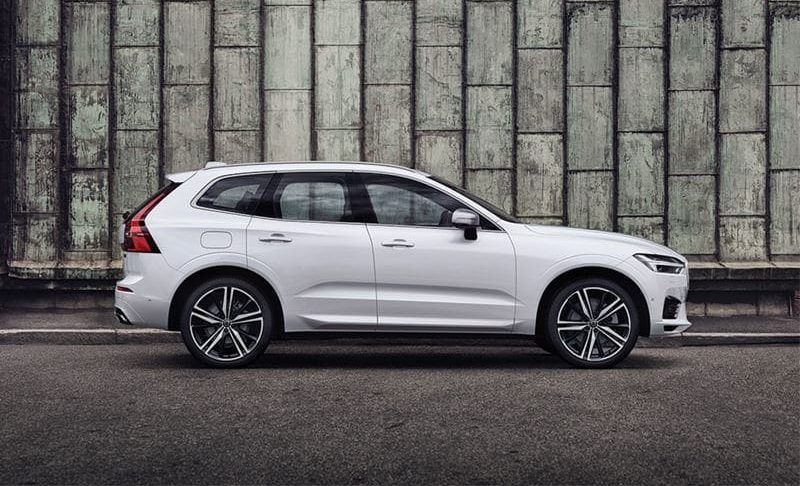 Well-known car manufacturer Volvo, was seeking a way to promote its new premium SUV to the right audience and selected LinkedIn. A big reason behind its choice was the way Volvo could use job title information to help it get its carousel ads in front of the right target audience for its 2018 XC60 SUV.
While no specific figures have been shared showcasing the exact success of the LinkedIn carousel ads, Volvo’s Canadian media agency said: “The performance surpassed expectations, achieving results well beyond our benchmarks.”
That sounds like a great result for Volvo, highlighting that LinkedIn ads can deliver stellar numbers for companies of all size and from every kind of industry.

6. Variety the Key for IDA Ireland

IDA Ireland was named as the winner of the LinkedIn 2018 Ad awards for its campaign last year. By using a combination of LinkedIn ad options, including personalized dynamic ads, it reached over 800,000 decision makers and influencers among the company’s target audience.
The results of the 2018 LinkedIn ad campaign were impressive:


The use of LinkedIn ads as part of a broader, but still LinkedIn focused ad campaign, highlights that if you reach the right audience with your well-crafted ads, the results can be everything you hoped for – and more.

After seeing the different ways in which a variety of businesses have used LinkedIn as their platform of choice for a targeted ad campaign, its easy to see why it should feature as part of an ad campaign that wants to target a business audience. LinkedIn’s ad tools allow for some really specific targeting which can work very well, particularly if you have the right ads and content to promote on the platform.

Have you seen a LinkedIn campaign that has caught your attention? Pop it in the comments below.