However, if you’re relatively new to Facebook Ad campaign creation, or you’ve noticed your success rates have fallen off, then it might be time to take a look at a few hacks I’ve discovered over the years to help you out. While all the hacks might not work for everyone, I’m pretty sure that at least a few of them will prove useful for your Facebook Ad plans.

Finding the right target audience for your Facebook Ads is an essential element of achieving a good rate of success with your Facebook Ad campaign. However, not everyone does all the work required to get this right. Unfortunately, many people still think that simply optimising their ads is enough – it’s not. You need to know exactly who your target audience is and how they engage with your Facebook Ads.
A simple way to do this is through Facebook Ad Reports. The reports show you who has been shown your ads and your conversion rate. However, the reports can also show you other details to help you understand how your new customers engage with Facebook ads in general. This can help you create more target-related rules to ensure you’re Facebook Ads are being shown to the right audience in the right format.

This may seem like a simple idea, but surprisingly, not everyone uses it. According to research by Facebook, 80% of users react negatively to video content they didn’t expect. By adding text as a way to introduce your video Ad content, your targeted users are much more likely to view it in a positive light which should aid conversion rates.

This is a great way to understand how well – or not – your new ad is doing. However, in order to achieve 10,000+ ad impressions in 48 hours, rather than the usual 5 days, don’t just select the Facebook Ads’ accelerated delivery option. That option will achieve a faster ad delivery schedule; however, Facebook is prone to focus more on speed rather than also ensuring the ad is delivered to the right audience at the right price.
Instead, when you launch your new Facebook Ad campaign, assign Daily or Lifetime budgets at between 200-500% above your planned budget. This will ensure your new ad is seen by the right people on the right device in a shorter period. Once your new ad has made over 10,000 impressions – which should be around the 48-hour mark – you can review the results of the new ad and also, reset your budget to your actual planned budget. You can also make any changes to the ad that are required, based on those engagement and conversion results.

For some businesses, abandoned shopping carts can become the bane of a Facebook ad campaign. Instead of abandoning those potential clients, once you have a certain number of them, the creation of a retargeting video ad can help give them the extra encouragement they need to return to their abandoned cart and complete their purchase.
Successful retargeting Facebook Video ads often include some detail on what it’s like to use the product or similar products the potential customer almost bought. Or, you could show them more about the company values, or perhaps reviews from customers who did make a purchase.

Provided it doesn’t go against your branding and company message, colourful Facebook Ads can help your message stand out more on busy news feeds that are often awash with colourful scenes and imagery from a user’s friends and families.
If your ads are typically low on colour and heavy on text, why not change it up and ad colour and limit the text? By bringing some brightness into your Facebook Ad you might just encourage more users to stop and engage with your ad and your business.

While Facebook Ads come complete with a handy button for users to click to head to your landing page, you shouldn’t rely solely on that to get potential customers on to your website. A simple hack is to add a link to the desired landing page for the ad within the text, in addition to the button that Facebook already places on your ad.

When you create a new Facebook Ad, many people opt to duplicate a previous ad because it’s quicker and easier. However, when you do this, you’re removing social proof from the initial post. However, there is another way – consolidate your ads.
You do this by going to ‘Business Manager’ then to ‘Page Posts’. Then you just get the ID for the ad you want to use and then use that ID when you create a new ad. This will ensure you keep all the social proof of likes, shares and comments, in one place which will help show your ads are popular and that you’re a business or brand worth engaging with.

Split testing or also known as A/B testing, this is a great way to make sure you’re getting your ads right for your target audience. Simply create two ads for the same thing and show them to the same audience. The results will include the performance of both ads measured against your campaign objectives and will show you which ad performed best, giving you a clear way forward for what your audience likes and wants from you. 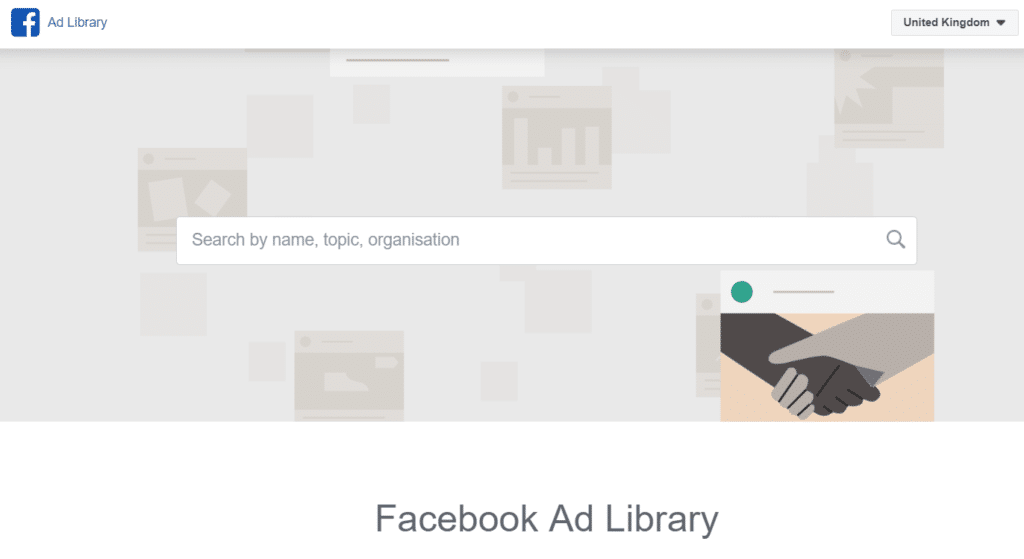 After Cambridge Analytica scandal Facebook pledged to become more transparent. Part of this involved showing people what adverts brands are running. They did this by adding an Info and Ads tab to the side menu on profiles that once clicked, showed users the ads currently running by country. Then in May 2019 this tab mysteriously disappeared. Many people think that’s it for spying on your competitors Facebook ads, but no! Facebook merely moved all of this over to its own dedicated area named Facebook Ad Library. On top of that you can also access the Facebook Ad Report from the Ad Library. This is essentially Facebook’s compiled snapshot of data for ads about social issues, elections or politics. Can make for interesting reading in today’s fluid political environment.